NVC for teachers, educators and parents

3
let them grow up in trust
If you are a parent, a teacher or an educator, questioning the old paradigms of raising children, and wanting to transform them to bring collaboration, trust and mutual respect – I’m passionate to work together with you.

I offer workshops, individual coaching and supervision for all who want to create with the children relationships that are built on trust, cooperation, mutual respect and consideration.

Do you want to empower children to be self-reliant, independent-thinkers, creative and able?
Do you want to see them compassionate and aware of self and others?
And do you want to enjoy yourself in the process?

You are welcome to work with me and learn to:
Stories for inspiration:

Who solves problems – about mediating conflicts

In a playroom the boys built a large pyramid of mattresses and now they jump from it on the floor.

After a while, Kate comes over and begins to climb.

Me: Paul, would you like just boys jumping from here?

Me: Kate wants to jump too. What can we do?

Paul: Only boys can jump!

At this moment Kate leaves and Myra comes in saying that she also wants to jump.

Me: And now Myra wants to jump. What we do?

Paul: She can build a different tower.

Me: Which building blocks can she use? (I see that they are all used).

Paul stands with a frown on his face, while Myra climbs onto the structure. Paul then turns to her and, raising his hand up, says in a tearful voice: Only boys can jump!

I, gently holding his hand: Paul, are you angry because you would like it to be only for boys?

Yes, says Paul, he jumps and leaves for a moment. Myra jumps after him, and then Paul walks over to her and helps her climb the mattress again.

Me: You see Myra, Paul helped you 🙂 Paul, look how Myra smiles.

Paul jumps a few more times, after which only four girls are left on the mattresses.

What did I do:

I want to be alone – about accepting the person, not the behaviour

– I want my dad – Lucas starts to cry. I did not see what happened, but I see that George hides behind a curtain.

I offer Lucas a hug, I check if anything hurts him, but it looks like it’s his heart which hurts the most.

– George – I turn to the boy who sneaks into the other part of the room – are you afraid that you did something wrong?

George is surprised. He starts shaking his head saying no, but then nods in confirmation.

– Come to me – I reach out to him – What happened? – George is silent. – Did you want to see the picture Lucas held? – George nods, but I’m not sure if this is what actually happened. I hug him and we rock for a moment, then George starts to play.

Moments later, I see George hitting Sophie, who does not want to give him a toy. I give Sophie a hug, reminding her to say stop if she doesn’t like something. Then, I invite George to join us.

– I want to be alone – replies George. I move closer and start talking to Sophie. George listens from a distance and after a while he comes closer. I invite both of them to decide how they can share the toy.

– George – I do not want you to hit anyone, because it hurts – I turn to him, as the immediate issue is resolved.

– Please say what you want instead. Or ask for help, when you do not know what to do.

When soon George feels tired, he comes to hug me. When I go to the bathroom, he wants to go with me. He does not want to be alone.

Will it help George stop hitting? I do not know. I know that he’s learning how to be in this world, how to communicate and stand up for his needs. And I want to support him in it as a guide, not a judge. And I want him to know he matters to me.

In order to separate the person from the behaviour:

I’m in connection with the human being at all times, open to who he is, as well as his mistakes. I am verbally or non-verbally transmitting the message “you are ok”, “I care about you”. In this way, trust is built between us that helps us get along when the going gets tough.

Do not just do something, be there – M.B. Rosenberg – on the power of presence

I miss my mom – Frank approaches me with a sad look on his face. Oh gosh, here it comes again – I think to myself, remembering how often Frank misses his mom; afraid that we will end up in a bottomless pit. I take a breath and move my attention to here and now.

– You miss your mom! And what would you like to do with her?

– Have fun… and watch the movie.

Frank tells me that they watched a movie together with his mom, which they did not finish, and he was curious about what happens next.

And then… just like that, off he goes, with a smile to play with other boys.

– I’m so hungry that my stomach hurts! – Frank appears next to me.

– You are so, so very hungry! – I acknowledge him with astonishment.

– Yes – responds Frank, and goes off to play.

What did I do:

In the second situation, when I named what I saw, I did not know if Frank wanted me to do something or just to hear him. The answer came from Frank’s reaction. He did not want to eat just now. He wanted me to hear he was hungry.

When I opened up my curiosity, focused on connection and presence, I could engage in the conversation without feeling that I should “do” something about the situation. As a result, I was not tempted to “fix” Frank – offer him advice or explanations. I could simply be present with him in what he shared with me.

Download the stories
About me:
I’m passionate about bringing NVC into education – as a way of contributing to raising aware, competent, mature adults. Since 2014, I’ve been working with an NVC kindergarten and nursery in Warsaw, as well as offering workshops for teachers. I have also co-created and run a first gap-year program for youth 18-25 in Poland, aiming at supporting young people in re-discovering their gifts and crafting a life journey, which is a manifestation of who they really are. Read more about me HERE. 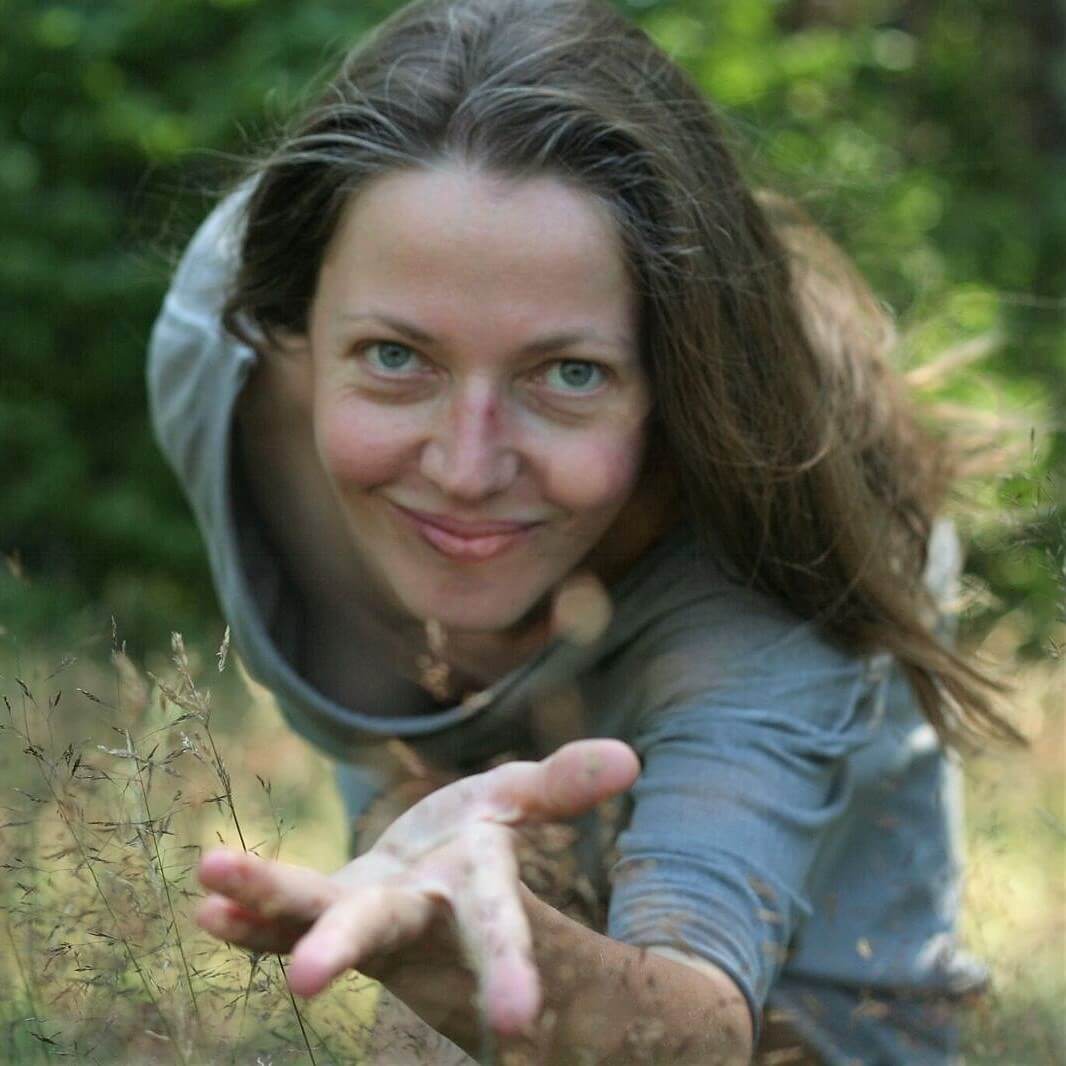 Here is what people say about working with me
Aga co-creates Zielona Wieża almost from the very start. She supports the teachers in working with the children, the parents, and each other. She supports the parents in relating with their children. And she supports the children. She observes, models, coaches, trains, mediates, advices and facilitates meets. Courageously she takes on challenges. She’s offers a solid portion of Nonviolent Communication and other useful approaches and tools – all in one person.
Mariusz Truszkowski

Founder of the Nursery and Kindergarten Zielona Wieża

Held in atmosphere of trust and safety, the workshop supported teachers in developing tools for their every day work, e.g. offering each other empathy, being aware of feelings and underlying needs. This directly translated into enhancing the quality of relationships within the school. The teachers remembered this workshop for a long time and referred to what was developed there, which gave me, as a headmaster, a great sense of meaning and efficiency.
Paulina Orbitowska

Aga leads workshops with an exceptional peace and understanding, which creates safety and ease for all the participants. She is a trainer who can be trusted. In her workshops I learned how to seek inside the answers to challenges and questions that are alive for me. I see a difference between a belief and an observation. I found a path to self-connection, as well as to connection with others. I am present in my life.
Przemek Borkowski

Graduate of the School of Life Program, www.schooloflife.pl

Workshops with Aga allowed me to discover my inner power. I gained practical tools, I use in my everyday life – including on how to say no, how to listen to own need and the need of others, how to deal with negative thoughts. I really liked the practice of belief transformation. I was not aware just how many beliefs I carry, which block my growth. All of the workshops are very practical, so it’s easy to translate them both into personal and professional life.
Wiktoria Dukacz

Gradute of the School of Life Program, www.schooloflife.pl